Can Holacracy Work For Your Social Venture?

Can Holacracy improve your Social Venture?

“Some people dream of being the boss. But what if your workplace had no boss at all?”

This is only one of the starting lines of many articles available online, related to companies with no managers, bye bye bosses and no job titles, no hierarchy. We all agree that the only constant in life is change, thus management and leadership sciences have gone through several transformations in the past 20 years: distributed authority system being one of the most radical. It may sound like any other CEO’s worst nightmare, but for Zappos, it’s a bold new experiment in management. The Amazon unit will become the largest company yet to embrace holacracy. 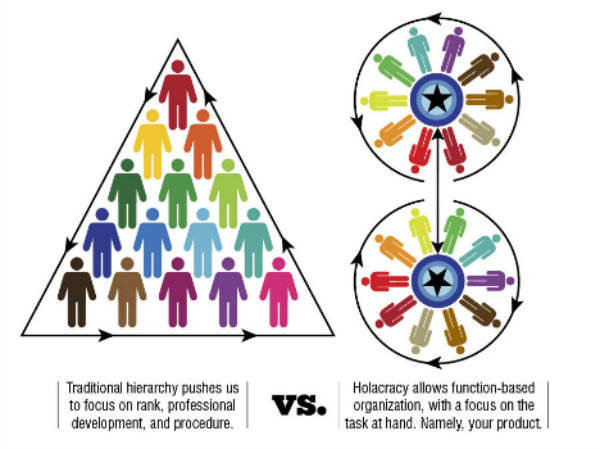 “Holacracy is a new operating system for organizations. Authority is distributed into an organic structure of circles and roles. Tensions and issues serve as fuel for continuously improving the organization. Holacracy unlocks a whole new level of clarity and flow.” says Diederick Janse, one of the leading trainers that helps organisations to implement Holacracy.

Since September 2013, Impact Hub Vienna employs a holacratic structure of governance after a long quest for the right organizational structure. Alexis Eremia, co-founder of the Impact Hub Vienna shares her perspective on the process: “I’ve been passionate and concerned with leadership and organisational development for over 12 years, to realise that most of the theories can not thrive without a radical shift in structure. Holacracy is the only system I found that creates engagement and authority equally balanced with self-accountability. It is fascinating to observe the insecurity people feel once they realise the leader is not there anymore. It opens up a space for learning. Few months later in the process, the organisation looks completely different. The system just functions, independent of specific individuals, independent of changes.”

Three Coins, a social business that produces cutting-edge research and innovative tech tools for financial education, also just recently implemented Holacracy with the help of Austrian holacracy-expert Christiane Seuhs-Schöller. “We found that conventional governance structures just didn’t fit our start-up”, explains Lena Robinson, in charge of communications affairs. “Holacracy creates a corporate structure where entrepreneurial and creative people can work together in a super-effective way, without experiencing the common conflicts that often occur in teams that are both creative and entrepreneurial. In many ways, Holacracy is also a model that adapts to the work needs of our generation.” It also impacts the atmosphere at the workplace: “Personal and professional relations are naturally separated, which is very useful when working in a small team.“

Can It Work For You As Well?

Next to Zappos many other pioneers such as David Allen (author of Getting Things Done), and Evan Williams, one of the co-founders of Twitter, have implemented Holacracy.

To answer the growing interest in Holacracy and how Impact Hub Vienna has implemented it, an introduction workshop by Diederick Janse will be offered soon. If you want to be notified as soon as the dates are fixed, please write to [email protected] with the subject line “Holacracy Introduction Workshop.”

Find out more about Holacracy here: